Planning Doesn’t Have to Be the Enemy of Agile – HBR

Posted by timmreardon on 08/17/2020
Posted in: Uncategorized. Leave a comment 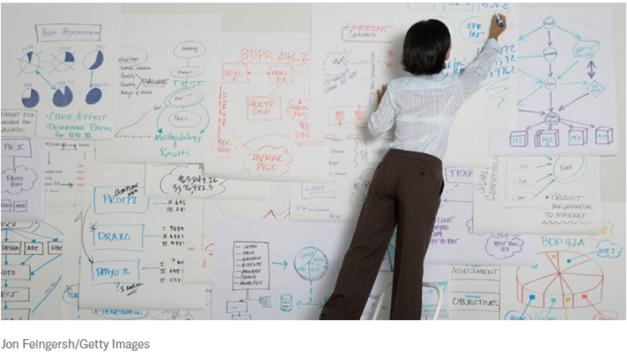 Planning has long been one of the cornerstones of management. Early in the twentieth century Henri Fayol identified the job of managers as to plan, organize, command, coordinate, and control. The capacity and willingness of managers to plan developed throughout the century. Management by Objectives (MBO) became the height of corporate fashion in the late 1950s. The world appeared predictable. The future could be planned. It seemed sensible, therefore, for executives to identify their objectives. They could then focus on managing in such a way that these objectives were achieved.

This was the capitalist equivalent of the Communist system’s five-year plans. In fact, one management theorist of the 1960s suggested that the best managed organizations in the world were the Standard Oil Company of New Jersey, the Roman Catholic Church and the Communist Party. The belief was that if the future was mapped out, it would happen.

Later, MBO evolved into strategic planning. Corporations developed large corporate units dedicated to it. They were deliberately detached from the day-to-day realities of the business and emphasized formal procedures around numbers. Henry Mintzberg defined strategic planning as “a formalized system for codifying, elaborating and operationalizing the strategies which companies already have.” The fundamental belief was still that the future could largely be predicted.

Now, strategic planning has fallen out of favor. In the face of relentless technological change, disruptive forces in industry after industry, global competition, and so on, planning seems like pointless wishful thinking.

And yet, planning is clearly essential for any company of any size. Look around your own organization. The fact that you have a place to work which is equipped for the job, and you and your colleagues are working on a particular project at a particular time and place, requires some sort of planning. The reality is that plans have to be made about the use of a company’s resources all of the time. Some are short-term, others stretch into an imagined future.

Universally valuable, but desperately unfashionable, planning waits like a spinster in a Jane Austen novel for someone to recognize her worth.

But executives are wary of planning because it feels rigid, slow, and bureaucratic. The Fayol legacy lingers. A 2016 HBR Analytics survey of 385 managers revealed that most executives were frustrated with planning because they believed that speed was important and that plans frequently changed anyway. Why engage in a slow, painful planning exercise when you’re not even going to follow the plan?

The frustrations with current planning practices intersect with another fundamental managerial trend: organizational agility. Reorganizing around small self-managing teams — enhanced by agility methods like Scrum and LeSS — is emerging as the route to the organizational agility required to compete in the fast-changing business reality. One of the key principles underpinning team-based agility is that teams autonomously decide their priorities and where to allocate their own resources.

The logic of centralized long-term strategic planning (done once a year at a fixed time) is the antithesis of an organization redesigned around teams who define their own priorities and resources allocation on a weekly basis.

But if planning and agility are both necessary, organizations have to make them work. They have to create a Venn diagram with planning on one side, agility on the other, and a practical and workable sweet-spot in the middle.  This is why the quest to rethink strategic planning has never been more urgent and critical. Planning twenty-first century style should be reconceived as agile planning.

Agile planning has a number of characteristics:

The intersection of planning with organizational agility generates two other paramount requirements:

A process able to coordinate and align with agile teams

Agile organizations face the challenge of managing the local autonomy of squads (bottom-up input) consistently with a bigger picture represented by the tribe’s goals and by cross-tribe interdependencies and the strategic priorities of the organization (top-down view). Governing this tension requires new processes and routines for planning and coordination.

Consider the Dutch financial services firm ING Bank. It restructured its operations in the Netherlands by reorganizing 3,500 employees into agile squads. These are autonomous multidisciplinary teams (up to nine people per team) able to define their work and make business decisions quickly and flexibly. Squads are organized into a Tribe (of no more than 150 people), a collection of squads working on related areas.

ING Bank revisited its process and introduced routine meetings and formats to create alignment between and within tribes. Each tribe develops a QBR (Quarterly Business Review), a six-page document outlining tribe-level priorities, objectives and key results.   This is then discussed in a large alignment meeting (labelled the QBR Marketplace) attended by tribe leads and other relevant leaders. At this meeting one fundamental question is addressed: when we add up everything, does this contribute to our company’s strategic goals?

The alignment within a tribe happens at what is called a Portfolio Marketplace event: representatives of each of the squads which make up the tribe come together to agree on how the set goals are going to be achieved and to address opportunities for synergies.

The ING Bank example shows how the planning process is still necessary and essential to an agile company although in a different fashion with different processes, mechanisms and routines.

Planners have traditionally been obsessed with gathering hard data on their industry, markets, competitors. Soft data — networks of contacts, talking with customers, suppliers and employees, using intuition and using the grapevine — have all but been ignored.

From the 1960s onwards, planning was built around analysis.  Now, thanks to Big Data, the ability to generate data is pretty well limitless.  This does not necessarily allow us to create better plans for the future.

Soft data is also vital. “While hard data may inform the intellect, it is largely soft data that generate wisdom. They may be difficult to ‘analyze’, but they are indispensable for synthesis — the key to strategy making,” says Henry Mintzberg.

In an agile organization, teams use design thinking and other exploratory techniques (plus data) to make rapid decisions and change the course on a weekly basis. Decision making is done by a team of people, offsetting in this way the potential biases of a single person making a decision based on her individual judgement. To some extent, an agile team-based organization enables the possibility to leverage qualitative data and judgement — combined today with infinite hard data — for better decisions.

Relying solely on hard data has unquestionably killed many potential great businesses. Take Nespresso, the coffee pod pioneer developed by Nestle.  Nespresso took off when it stopped targeting offices and started marketing itself to households. There was little data on how households would respond to the concept and whatever information was available suggested a perceived consumer value of just 25 Swiss centimes versus a company-wide threshold requirement of 40 centimes. The Nespresso team had to interpret the data skillfully to present a better case to top management. Because it believed strongly in the idea, it forced the company to take a bigger-than-usual risk. If Nestle had been guided solely by quantitative market research the concept would never have gotten off the ground.

The traditional planning approach needs to be revisited to better serve the purposes of the agile enterprise of the twenty-first century. Agile planning is the future of planning. This new approach will require two fundamental elements. First, replacing the traditional obsessions on hard data and playing the numbers-game with a more balanced co-existence of hard and soft data where judgment also plays an important role. Second, introducing new mechanisms and routines to ensure alignment between the hundreds of self-organizing autonomous local teams and the overarching goals and directions of the company.

Alessandro Di Fiore is the founder and CEO of the European Centre for Strategic Innovation (ECSI) and ECSI Consulting. He is based in Boston and Milan. He can be reached at adifiore@ecsi-consulting.com. Follow him on twitter @alexdifiore