Posted by timmreardon on 11/10/2018
Posted in: Uncategorized. Leave a comment

Interview with Dr. Melinda Ashton on easing the burden of administrative tasks in medicine and helping clinicians find more meaning in their work. (10:17) Download

Many health care organizations are searching for ways to engage employees and protect against burnout, and involvement in meaningful work has been reported to serve both functions. According to Bailey and Madden, it is easy to damage employees’ sense of meaningfulness by presenting them with pointless tasks that lead them to wonder, “Why am I bothering to do this?”1 An increase in administrative tasks has resulted in less time for the activity that clinicians find most important: interacting with patients. Some commentators have recently suggested that it may not be the electronic health record (EHR) per se that leads to burnout, but rather the approach to documentation that has been adopted in the United States.2

Although my health system, like most in the United States, cannot magically eliminate the documentation required for billing and regulatory compliance, my colleagues and I had reason to believe that there might be some documentation tasks that could be eliminated. Our EHR was adopted more than 10 years ago, and since then we have made a number of additions and changes to meet various identified needs. We decided to see whether we could reduce some of the unintended burden imposed by our EHR and launched a program called “Getting Rid of Stupid Stuff.” Starting in October 2017, we asked all employees to look at their daily documentation experience and nominate anything in the EHR that they thought was poorly designed, unnecessary, or just plain stupid. The first thought we shared as we kicked off this effort was, “Stupid is in the eye of the beholder. Everything that we might now call stupid was thought to be a good idea at some point.”

Since we kicked off the program, we have received nominations in all three categories. Some reports of unintended documentation requirements resulted in quick changes. In several cases, requirements were being applied to patients of different ages than originally planned. For example, we received a request from a nurse who worked with adolescent patients asking that we remove a physical assessment row called “cord.” This entry had been intended to reflect care of the umbilical cord remnant in newborns, and the planned suppression of the row after 30 days of age had never occurred. This row has now been appropriately suppressed.

In another example, for patients who require briefs for incontinence, there are choices to indicate whether the patient is incontinent of urine or stool (or both). Completing the documentation requires three clicks. A nurse who cares for newborns reported that she had to click three times whenever she changed a diaper. We promptly created single-click documentation for children who are appropriately in diapers. Nurses had been burdened with these documentation requirements for years, but they had never been specifically invited to bring their issues to the attention of people who could make changes.

In the second category — documentation that could be completed more effectively — we identified a feature called the rounding row that had been added years ago when we were implementing hourly rounding by nurses and nurse aides. The intention was to allow us to monitor whether this rounding was actually occurring. We had observed that this requirement led to an exercise of rote clicking that didn’t always accurately capture the care provided. We removed the row and informed nurses that what we were interested in was their usual documentation of the care they provided to patients. We were surprised to find that making this single click consumed approximately 1700 nursing hours per month at our four hospitals (given the average number of clicks per month and the fact that each nurse or nursing assistant spent 24 seconds per click).

A number of nurses supplied nominations regarding the frequency of required complete “head-to-toe” nursing assessments. Nurses are expected to do a complete assessment upon assuming care of each patient, but on some units we were requiring documentation of such assessments several times during a 12-hour shift. We sought to identify standards in the literature and found that some of our practices were in keeping with those standards. In other units, we reduced the frequency of required evaluation and documentation.

We received a nomination from an emergency medicine physician regarding our practice of printing an after-visit summary and then scanning it back into the system. He hadn’t noticed that the patient was asked to sign the document and that the signed document was stored as part of the record. His question led us to query other health systems and our legal team about the value of the signature, and we were able to remove this requirement. The physician was delighted that he had been able to influence a practice that he believed was a waste of support-staff time.

As anticipated, we received some nominations that made it clear that we needed to do a better job of educating staff about various documentation tools. Several requests came in from physicians asking for sorting and filtering capabilities that already existed. Although we have long had a physician-documentation optimization team to help our clinicians use the EHR efficiently, most physicians report that they don’t have time to meet with this team. We also heard from nurses asking us to remove items from the nursing admission database. We had previously pared down the database, and everything left is required by regulatory agencies or for billing. With the recent announcement that the Centers for Medicare and Medicaid Services is working to reduce required documentation,3 we may soon be able to remove additional items. 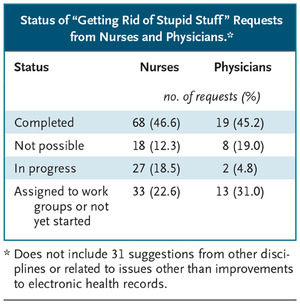 Although they were not formally submitted as nominations, we have removed 10 of the 12 most frequent alerts for physicians because they were simply being ignored. We are also reviewing order sets and removing the ones that have not been used recently. Interestingly, we have received more nominations from nurses than physicians (see table), even though physicians have been at the center of concerns regarding burnout. One explanation may be that nursing documentation is often task-based (and applies to many users), whereas physician documentation is largely note-based (and is often customized by each user). Reducing physicians’ documentation burden will probably require adoption of more standard, streamlined notes.

Our EHR vendor is aware of our work in general and is very supportive of it. It’s unlikely that the specific changes we have made would be relevant for other systems, however, since our EHR development predated any model system, and most of the issues we have found have come from well-intentioned efforts to improve or from missing details in a highly complicated system.

The Stupid Stuff program has been embraced throughout our organization over the past year and has extended beyond removing unnecessary documentation from the EHR. As an organization, we are searching for and finding work that should simply be retired. When the campaign was unveiled, it was largely met with surprise and sheepish laughter, then applause. We seem to have struck a nerve. It appears that there is stupid stuff all around us, and although many of the nominations we receive aren’t for big changes, the small wins that come from acknowledging and improving our daily work do matter. It is too early to have seen any measurable improvement in employee engagement from this effort, and continued work will be required to minimize documentation burden in a truly meaningful way, but the program has at least indicated that we are trying to reduce daily frustrations. Apparently it represents work that is important to our clinicians and other employees.

Disclosure forms provided by the author are available at NEJM.org.