Posted by timmreardon on 09/20/2018
Posted in: Uncategorized. Leave a comment

As a nation, public and private partners must work closely together to plan adaptively for current and emerging biothreats.

Today, the White House and four federal departments unveiled a comprehensive National Biodefense Strategy to make America safer against modern biological threats to the United States. In the 21st century, biological threats are increasingly complex and dangerous, and that demands that we act with urgency and singular effort to save lives and protect Americans.

Whether a natural outbreak, an accidental release, or a deliberate attack, biological threats are among the most serious we face, with the potential for significant health, economic and national security impacts.  Therefore, promoting our health security is a national security imperative.

The strategy released today not only establishes the U.S. government vision for biodefense, it prioritizes and coordinates federal biodefense activities and budgets. In meeting the aggressive demands of the National Biodefense Strategy – PDF as directed by President Trump’s National Security Presidential Memorandum, we will improve the nation’s readiness and response capabilities to combat 21st century biological threats to humans, animals, agriculture and the environment. 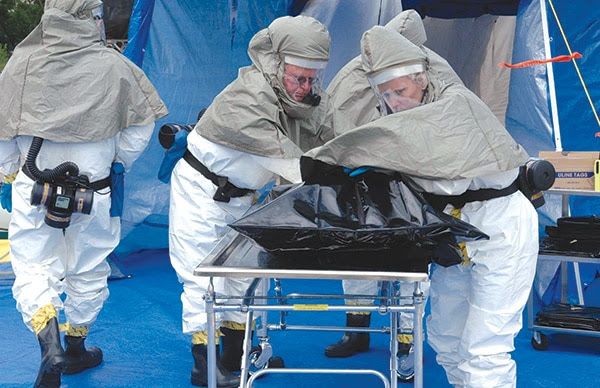 Biodefense entails a range of coordinated actions to counter biothreats, reduce risks, and prepare for, respond to, and recover from incidents. As biothreats continue to evolve, so must our biodefense capabilities.

Coordination of such complex actions requires a sound strategy, commitment, and governance structure. As an initial step in implementing the strategy, leaders from every federal department involved in biodefense formed a steering committee, led by Secretary Azar, that provides strategic guidance in preparing for, countering, and responding to biological threats. I am honored that Secretary Azar asked me to lead the day-to-day coordination team that supports this committee in improving biodefense readiness. As the assistant secretary for preparedness and response, my office routinely coordinates federal preparedness, response and recovery efforts to address the healthcare and public health impacts of public health emergencies and other disasters, including bioincidents.

The National Biodefense Strategy’s coordination team also will engage state, local, tribal and territorial governments, as well as private and international partners as appropriate, because while coordinating federal activities and budgets across the full spectrum of biodefense sectors and activities represents a monumental step forward; being truly successful will require a whole-of-nation approach with government agencies at all levels and non-government stakeholders playing important roles in providing support and guidance. As a nation, public and private partners must work closely together to plan adaptively for current and emerging biothreats, whether they stem from terrorist groups, pandemics, natural disasters, or even rouge nation states.

Seventeen years ago today, our nation experienced a biological attack with anthrax mailed in letters, killing five people and injuring 17, and costing an estimated $6 billion in clean up and lost revenue. Those historic attacks, the more recent Ebola outbreaks and the emergence of potentially deadly influenza viruses demonstrate how severe biological threats continue to evolve, both man-made and from nature, can be. By meeting the call to action in the National Biodefense Strategy, we become better equipped to protect this nation against all biothreats.