Posted by timmreardon on 11/25/2017
Posted in: Uncategorized. Leave a comment

They are wives, husbands, mothers and fathers, a good neighbor checking in, a best friend helping out. They sacrifice their time, their jobs, even their health to provide a service worth billions of dollars to the United States, often with no recognition whatsoever.

They are caregivers to active or retired military service members—not paid professionals, but loved ones thrown into battle against panic attacks, traumatic brain injuries, or just the everyday bureaucracies of American health care.

RAND research has helped bring their stories to light in recent years—who they are, what they do, and above all, what they need to succeed. That research has revealed the enormous sacrifices that millions of military caregivers make every day, as well as the gaps in support programs meant to help them.

It has helped define military caregivers as public servants in their own right, America’s “hidden heroes.”

An Untold Story of Profound Need

Elizabeth Dole spent most of 2010 at the hospital bedside of her husband, Bob, as he recovered from a long illness at Walter Reed National Military Medical Center. As she walked the halls, the former senator came to realize that a “quiet, untold story of profound need” was playing out behind every door—a caregiving crisis that had gone almost entirely unnoticed.

She asked RAND to investigate. By then, the United States had been fighting wars in Iraq and Afghanistan for the better part of a decade. Yet few studies had looked at the people caring for service members when they came home. The best data RAND could find suggested there might be 275,000 of them—or there could be well more than a million.

That was the starting point for what became the most comprehensive study of military caregivers ever undertaken. RAND researchers surveyed thousands of military households and interviewed dozens of individual caregivers in face-to-face focus groups. They worked through resource guides, websites, and word of mouth to identify every known support program available to caregivers and their care recipients.

1.1 million people provide support to veterans of the post–9/11 wars in Iraq and Afghanistan.

Those caring for older veterans looked in many ways like other caregivers in the civilian world. They were most likely to be older adult children helping a parent with the physical disabilities of age or illness, with well-established networks of support to help them.

They were most often spouses (33 percent), parents (25 percent), or unrelated friends and neighbors (23 percent); around 40 percent of them were men. More than one-third of them had not yet turned 31.

Most were employed, and they reported missing an average of 3.5 days of work every month because of their caregiving duties. Nearly half said they had no support network.

The needs of their care recipients were different as well. Nearly two-thirds had some kind of mental-health disorder, such as post-traumatic stress disorder (PTSD), or were struggling with substance abuse. One of the most common tasks their caregivers performed was helping them cope with stressful situations or other triggers. 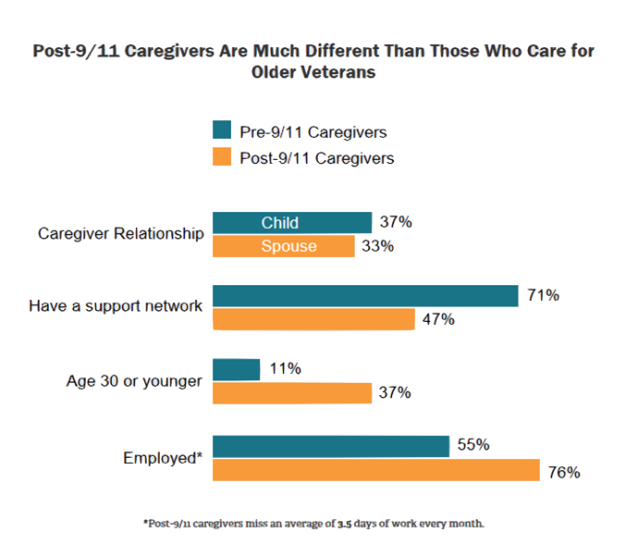 Yet all too often, the programs meant to help military caregivers had not adjusted to those new realities, the researchers found. Many were still focused on older veterans with physical illnesses such as dementia, not younger veterans of Iraq or Afghanistan haunted by depression or substance-use disorders. Other programs were only open to immediate family members of service members or veterans, not friends or neighbors.

Almost none of the programs provided financial support to caregivers, or helped connect them with health care, the researchers found. And only a handful provided respite care, to allow caregivers a much-needed break from their responsibilities. 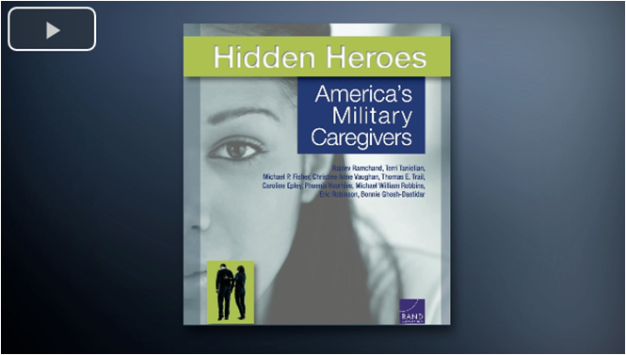