Fourteen US and Canadian cancer institutes will use International Business Machines Corp.’s Watson computer system to choose therapies based on a tumor’s genetic fingerprints, the company said on Tuesday, the latest step toward bringing personalized cancer treatments to more patients.

Oncology is the first specialty where matching therapy to DNA has improved outcomes for some patients, inspiring the “precision medicine initiative” President Barack Obama announced in January.

But it can take weeks to identify drugs targeting cancer-causing mutations. Watson can do it in minutes and has in its database the findings of scientific papers and clinical trials on particular cancers and potential therapies.

Faced with such a data deluge, “the solution is going to be Watson or something like it,” said oncologist Norman Sharpless of the University of North Carolina Lineberger Cancer Center. “Humans alone can’t do it.”

IBM is positioning Watson for exactly this task: an area of medicine where humans can see the vast potential, but can’t begin to wrangle the data needed to achieve it. “Genomics is the secret to unlocking personalized medicine,” said Steve Gold, a Vice President of the IBM Watson Group, at a press conference on Tuesday.

Yet it is unclear how many patients will be helped by such a “big data” approach. For one thing, in many common cancers old-line chemotherapy and radiation will remain the standard of care, and genomic analysis may not make a difference.

The scientists directly involved with Watson aren’t making any promises, but they’re hopeful they can slowly begin to make a difference in the world of cancer treatment, which today leaves a great number of patients without many good options.

“Traditional cancer treatments are moderately effective, associated with moderate toxicity, and many patients still succumb to the disease,” said Lukas Wartman, assistant director of Cancer Genomics at Washington University and a leukemia survivor, at Tuesday’s press conference. “There’s been a lot of pessimism among those [fighting] cancer, and Watson offers an opportunity to fight back against that pessimism.” 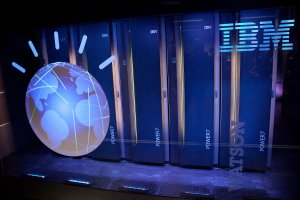 Cloud-based Watson will be used at the centers – including Cleveland Clinic, Fred & Pamela Buffett Cancer Center in Omaha and Yale Cancer Center – by late 2015, said Steve Harvey, vice president of IBM Watson Health. The centers pay a subscription fee, which IBM did not disclose.

Oncologists will upload the DNA fingerprint of a patient’s tumor, which indicates which genes are mutated and possibly driving the malignancy. Watson, recognized broadly for beating two champions of the game show Jeopardy! in 2011, will sift through thousands of mutations and try to identify which is driving the tumor, and therefore what a drug must target.

Distinguishing driver mutations from others is a huge challenge. IBM spent more than a year developing a scoring system so Watson can do that, since targeting non-driver mutations would not help.

“Watson will look for actionable targets,” Harvey said, matching them to approved and experimental cancer drugs and even non-cancer drugs (if Watson decides the latter interfere with a biological pathway driving a malignancy).

But Watson has trouble identifying actionable targets in cancers with many mutations. Although genetic profiling is standard in melanoma and some lung cancers, where drugs such as Zelboraf from the Genentech unit of Roche Holding AG target the driver mutation, in most common tumors traditional chemotherapy and radiation remain the standard of care.

“When institutions do genetic sequencing, only about half the cases come back with something actionable,” Harvey said, often because it is impossible to identify the driver mutation or no targeted therapy exists.