The Veterans Affairs Department boasted another dramatic drop in its backlog of benefits claims in 2014, but will need an extra boost in coming months to meet its goal of zeroing out the payout delays by the end of 2015. 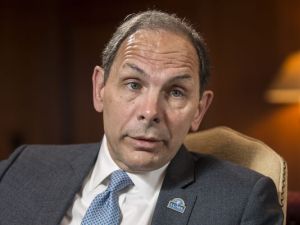 But despite that solid progress, VA workers are still not on pace to fully eliminate the backlog by the end of next year, a goal long promised by department officials.

After two years of intense focus from lawmakers and critics, attention on the claims backlog has waned since early 2014. Worries about the thousands of veterans waiting for disability payouts were overtaken by worries about lengthy care delays at VA medical centers and data manipulation by department officials, scandals that forced the resignation of former VA Secretary Eric Shinseki.

In recent remarks, new VA Secretary Bob McDonald has reaffirmed the promise to not only zero out the backlog, but improve the process to prevent future delays in processing claims.

VA workers completed more than 1.3 million compensation and pension claims in fiscal 2014, a new record. Over the last two years, officials have used a combination of digital innovations, new software and worker overtime to aggressively whittle down the backlog total.

But the enormity of the workload — Maffucci says she sees no signs of a near-term drop in the number of incoming claims — and the size of a backlog that peaked above 610,000 cases in March 2013 make zero an elusive goal.

“And getting to zero is still important, because it’s a promise that was made to veterans,” said Maffucci, who tracks the department’s progress each week on the IAVA website. “Our members still tell us this is one of their top concerns. Keeping that promise still matters.”

They also added about $11 million to the VA budget request for the Board of Veterans Appeals to address the next disability claims problem: the appeals backlog.

Since the first-time claims backlog began dropping, the number of appeals has risen steadily, from about 245,000 cases in March 2013 to more than 287,000 cases today.

VA officials have said that’s due to a larger number of cases coming in, not a reflection of first-time claims being shifted into the appeals pile. Still, with appeals cases taking several years to complete, on average, veterans groups have raised concerns about that rising total.

The department will need to make more progress in January and February to reach its zero goal by next December.